What Are Cannabis Appellations? | PotGuide.com


People who don’t drink or even have much interest in wine are familiar with its different types, such as Champagne or Bordeaux. Indeed, they are both wines, but they are distinct appellations, which in its simplest explanation is how a country categorizes its wines by geographic boundaries.

True Champagne comes from France’s northeastern corner near Paris, and wines from this specific region are the only ones legally allowed to be labeled as “Champagne.” The same applies for Bordeaux wines (Merlot and Cabernet Sauvignon) in the southwest part of France near the Atlantic Coast.

Though wine appellations generally refer to a particular geographic region, they also confer more than just location. Frequently, drinking wine that has received an appellation tells the consumer that their chosen wine is of high quality and has adhered to a strict set of rules that cover growing practices, the level of alcohol in each bottle, and how long the wine has been aged to earn the appellation.

The legal cannabis industry lacks the full legal status that alcohol enjoys, but some in the cannabis industry are taking their cue from the wine world, looking to create cannabis appellations that will help to establish a strain’s reputation for quality and specify the characteristics that come from growing cannabis in a particular region. 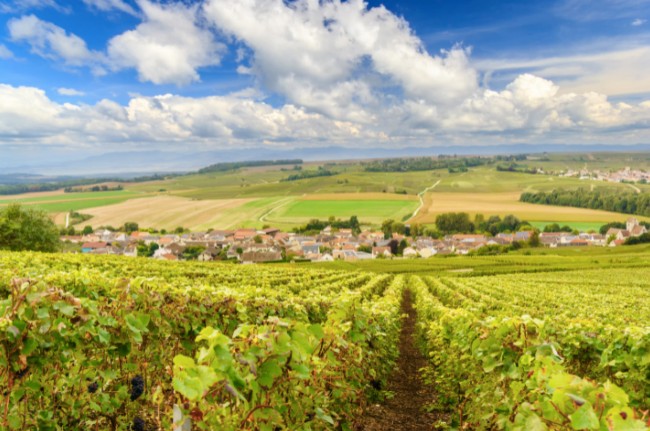 One well-known wine appellation is Champagne, which comes from a region in northeastern France. photo credit

Appellations have been critical to the success of the wine industry, and in California, where both wine and cannabis play large roles in local economies, lawmakers seem to be on the same page with the passage of Senate Bill 67. This new law opens the doors for legacy cannabis farmers to “claim, market, and protect the unique character of the marijuana produced in their regions, highlighting flavor, potency, and quality differences for each place.”

However, indoor-grown cannabis would not be eligible for an appellation due to the concept of terroir, a French term that describes the environmental factors that affect a crop’s phenotype, as well as farming practices and a crop’s growth habitat, but more specifically, the literal ground in which it is grown. To achieve a terroir-based appellation, the plant must have contact with the native soil, water from the site, exposure to sunlight, and not be manipulated by artificial lighting.

What Appellations Can Do for Cannabis

Cannabis does have an unofficial parallel to appellations with landrace strains such as Afghan Kush (Afghanistan), Lamb’s Bread (Jamaica), and Colombian Gold (Colombia). Landraces are specific to their regions and have adapted to their specific environment, but there is not a formal system that guarantees quality or specific growing practices like appellations do.

Creating a more widespread appellation system for cannabis could be very helpful to consumers by ensuring confidence in the product, truth in labeling, and could also act as a leg up for small craft cannabis producers, who make up the majority of growers in Northern California.

California cannabis growers could potentially do the same with supportive regulations.

Such moves could grow consumer awareness about local cannabis genetics and farming practices, and be a powerful marketing tool in both national and international markets should cannabis ever become federally legal.

The benefits of establishing cannabis appellations seem fairly clear. Nonetheless, legacy legalization states like Colorado, Washington, and Oregon do not have such programs, and California’s appellation program is just getting off the ground, so it will take some time to see the fruits of their labor.

But the tide may be turning. The SXSW 2021 conference convened a group of panelists to discuss the topic in a webinar titled, “The Future of Cannabis is Appellation Designation.” While it might not be a current reality, at least it’s coming to the front of more people’s minds.

What are your thoughts on cannabis appellations? Are they the next big thing or just a passing trend? Share in the comments below!